A Look at the Foreign Policies of the 2016 Presidential Election: Libertarian Ticket

Relatively unknown until recently, the Libertarian Party has made incredible strides this election cycle. The party is polling nationally around 10-13% according to multiple polling groups, which gives them the potential to hit the debate stage this fall. A more unfamiliar party on the national stage, it hasn’t been vetted like the Democratic and Republican Parties. This year the Libertarians have chosen Gary Johnson and Bill Weld as their Presidential and Vice-Presidential nominees, former governors of New Mexico and Massachusetts respectively, who give the Libertarian ticket much needed executive experience. 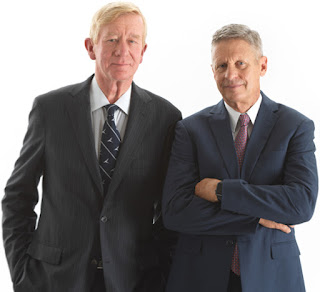 The official platform of the Libertarian Party “would end the current U.S. government policy of foreign intervention, including military and economic aid”. This includes ending involvement with the United Nations. Libertarians also have the view that the US shouldn’t be in any entangling alliances. They believe that we should have a strong military for defensive purposes but little engagement with the International Community beyond that. The platform also states.

“Political freedom and escape from tyranny demand that individuals not be unreasonably constrained by government in the crossing of political borders…however, we support control over the entry into our country of foreign nationals who pose a credible threat to security, health, or property.”

The Libertarian Party, while unwilling to enter into entangling alliances, is a proponent of offering refuge to more people fleeing political persecution of war—but with the caveat of making sure refugees are vetted before being allowed across our borders. Presidential hopeful Gary Johnson breaks from his party’s traditional platform in an important way, taking a stance more similar to that of the Republican Party’s platform on the United Nations. Johnson supports the United States remaining in the UN, but maintaining a smaller role. He believes that it is important for the US to be involved with the UN in such a globalized world, but thinks that we can avoid being involved in unwanted foreign entanglements by taking a step back from being the “International Police Officer” of the world. He agrees with his own party’s platform when it comes to refugees.

Taking a step back from our role in the United Nations is not beneficial to the International Community or to the United States. By cooperating with the United Nations, the US is able to help create peace and ensure that human rights are held to a high standard globally. Through advocacy and education, the UNA-NCA aims to garner support and understanding for the United Nations in the US and to not only promote the ideals it stands for, but to advocate for those who have no other voice and have become displaced in this world. . The international community can make a powerful difference, and we should be a part of that strategy, action, and impact.

Who becomes our next President will determine much of the future for US – UN relations and the global field; so this election cycle, make sure that you vote. Every vote matters and you can make a difference right there by campaigning for your chosen candidate and promoting issues that you view as important to be included in the election dialogue. Don’t stand by; step in.
Posted by UNA-NCA at 10:42 AM No comments:

A Look at the Foreign Policies of the 2016 Presidential Election: DNC

Last week I took a look at the Presidential Ticket of Donald Trump and Mike Pence. I discussed their positions on the United Nations and their almost isolationist response to foreign policy. This week I will be taking a critical look at the Democratic Ticket of Hillary Clinton and Tim Kaine. Check back next week for a look at surprise players in the election, Libertarian Candidates Gov. Gary Johnson of New Mexico and Gov. Bill Weld of Massachusetts.

After a hard fought Democratic Primary where seemingly unknown Senator Bernie Sanders gave front-runner Hilary Clinton some seriously strong competition, Clinton came out on top as the Democratic Nominee for President. In the end, the Primary pushed the Democratic Party left on many issues and helped form a more unified and hopeful Democratic Party. She soon chose her running make, Tim Kaine, a Senator from Virginia who serves on the Foreign Relations Committee, the Budget Committee, and the Armed Services Committee. Kaine is often considered a bland choice, but he may have an underlying progressive lean based on his many years of service to the people of Virginia. 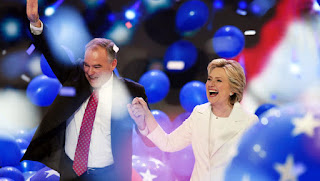 Hilary Clinton is well versed in foreign policy, as, having served four years as Secretary of State, she has had time to form her opinion on important policy issues. Clinton has worked with foreign dignitaries, diplomats, and President Obama to pass treaties and legislation through Congress on multiple foreign policy bills.

Clinton is very supportive of the United Nations. She attended the Climate Change Conference in Copenhagen in 2009, where she successfully pushed through a last minute increase in foreign aid for developing nations to deal with the effects of Climate Change. Secretary Clinton has especially worked with the UN Human Rights Council, historically stating in one address that, "Women's Rights are human rights, and human rights are women's rights." She has worked hard to promote equality for women as as for the LGBTQ community, illustrated when she revised her famous line in another speech to the Human Rights Council to say. "Gay Rights are Human Rights and Human Rights are Gay Rights."

Secretary Clinton also supports taking in a larger amount of Syrian Refugees. In September, an interviewer asked Clinton whether she wanted to bring in more refugees to the United States. Secretary Clinton replied that she, "would like to see us move from what is a good start with 10,000 to 65,000 and begin immediately to put into place the mechanisms for vetting people that we would take in." This is a more than 500% increase in refugees taken in by the United States. She views the refugee crisis as growing worse and wants to do everything she can to help ease the burden. This view seems to line up with the views of Clinton's running mate, Tim Kaine, very well. In May 2015, Tim Kaine, along with 13 other members of the Senate, sent a letter to President Obama urging him to increase the number of refugees accepted into the United States. They even went so far as to request the Obama administration encourage other nations to accept more refugees as well.

UNA-NCA believes that helping our brothers and sisters fleeing war, persecution or other forms of violence is of the utmost importance. Earlier in the summer we attended UNA-USA's advocacy day where one of our three important "asks" was for members of congress to support an increase in refugees taken in by the United States. While taking in refugees could have negative effects, we believe that with a thorough vetting process security risks can be managed and we can help people who are in dire need of assistance.
Posted by UNA-NCA at 9:05 AM No comments: