Not Goodbye, but See You Later: Parting Thoughts from a U.S. Diplomat 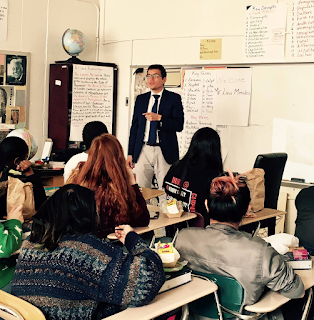 It’s no secret.  These are challenging times.

You get the point.  It is enough to make you feel bummed about the world.  But I have a confession.  I feel more hopeful today than ever before.  You see, over the last nine months, I have met hundreds of inspiring middle and high school students in the D.C. area, who represent the best of what America has to offer the world.

There are countless other stories similar to these.

I set out on this journey nine months ago to inspire the next generation of global leaders and along the way you have inspired me.  The part that is so exciting is that your journey is just beginning.  I think about all the amazing things you are going to accomplish and that lifts me up.

For those still feeling down about the world, here's what I know.  You are an incredibly resilient bunch and while things may seem cloudy now, the clouds will pass.  It may not be tomorrow or the day after, but a brighter day will come.  I promise.

One of the things that I love most about being a diplomat is seeing how much good there is in the world.  How many good people there are out there fighting the good fight without any recognition – ordinary people just like me and you doing extraordinary things.  These individuals are not different from you.  Whether you realize it or not, Model U.N. has already prepared you to fight the good fight.  It’s taught you to not be afraid to fail.  That finding common ground and developing consensus begins with listening, even to those you may not agree with.   That allies and partners are important in advancing your position forward.