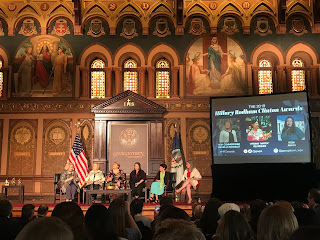 In late September, the already-dim lights of wooded Gaston Hall flickered along with the excited buzz of a room full of Georgetown students, professors, Ambassadors, and family members who had traversed seas and countries to see their loved ones receive an award. This journey was more than justified; their mothers, spouses, and sisters were not simply receiving a trophy, but were being honored with a 2019 Hillary Rodham Clinton Award for Advancing Women in Peace and Security.

The Honorable Michelle Bachelet, Virginia Martes Velásquez, and Rosa Anaya were the recipients of this year’s awards, and while the crowd certainly rose to their feet on several occasions throughout the morning as these women took the stage, the applause and energy that echoed through the hall when The Honorable Hillary Rodham Clinton herself approached the podium was without doubt exceptional.

The morning began with introductory remarks from John DeGioia, long-time President of Georgetown University. DeGioia applauded Clinton’s career-long commitment to women, and thanked her for the manner in which she has contributed to Georgetown University’s Institute for Women, Peace and Security (GIWPS).

The event’s eponymous icon then took the stage, energizing the young, female-heavy crowd in the most “Hillary Clinton” of ways. She strung together the common theme of the international empowerment of women, particularly highlighting Eleanor Roosevelt’s unparalleled achievements involving the Universal Declaration of Human Rights, Greta Thunberg’s now-iconic, “How dare you?,” from the UN Climate Action Summit in September, and of course, Nancy Pelosi’s recent country-shaking call-to-action to impeach the President.

As Clinton moved out of the spotlight, Melanne Verveer, Executive Director of the GIWPS, and former U.S. Ambassador for Global Women’s Issues, began the presentation of the awards. In introducing Bachelet, she emphasized the two-term President of Chile’s close ties to human rights abuses. Although her intense and descriptive repetition of the personal traumas that Bachelet endured under the Pinochet regime was a bit strange (and caused visible discomfort for most in the room – including Bachelet), Verveer’s point was clear. It would surely be difficult to find someone more qualified for – on top of being more personally connected to – what can be considered the most esteemed position in the international sphere for the defense of human rights.

Bachelet assumed her role as the seventh United Nations High Commissioner for Human Rights on September 1, 2018, mere months after concluding her second term as the Republic of Chile’s first female President – and her accolades do not stop there. She also served as Chile’s (and Latin America’s) first female Defense Minister, after serving as the country’s Health Minister. Beyond her country’s borders, her accomplishments are truly reaching, including notable experiences with the ILO, WHO, and EWEC, as well as serving as the first Director of UN Women. Her dedication to human rights, memory, and gender equality within her country are evident, but her impact has more than certainly reached the world stage as well; perhaps most powerfully after her UN appointment last year.

While Hillary Clinton and Michelle Bachelet are major household names for anyone with any awareness of international affairs, the world may not be so familiar with Virginia Martes Velásquez and Rosa Anaya. However, these women are doing critical work to promote women, peace, and security in their home countries, and the ripple-effects have been, and will be, felt across borders.

Virginia Martes Velásquez (lovingly, “Marta”) works in Choloma, Honduras; arguably the most dangerous city in one of the most dangerous countries in the world. Velásquez has been organizing and empowering women since her early 20s; now, 50 years later, she heads an organization that legally and psychologically supports women who have survived violence in varying aspects. Specifically, the work she has done since 1990 with her group, MOMUCLAA (Movimiento de Mujeres de la Colonia López Arellano, or Women’s Movement of the López Arellano Area), has made measurable local and national changes, and the perseverance and courage she must demonstrate on a daily basis is truly unfathomable.

The final award recipient of the morning was Rosa Anaya, who has been advocating peace in El Salvador for the past two decades. She currently heads Segundas Oportunidades (Second Chances), which rehabilitates inmates in prisons across El Salvador. Her history with peace and justice is also quite personal; she is the daughter of two Salvadoran champions for human rights, and she shared the story of her immigration as a child to Canada, and then to the United States. Today, Anaya and her team create workshops that target the breaking down of toxic masculinity, and promote positive, productive futures for inmates. Anaya and Segundas Oportunidades have assuredly achieved their goal of creating communities that foster citizens who are “promotores de paz” (“promoters of peace”).

The event closed with a panel discussion moderated by Verveer, which included the three awardees and Clinton. Verveer directed one pre-selected student question to each woman, with topics ranging from the specifics of the Afghan peace process to the generalities of how to best approach each day knowing the great breadth of the struggles that still lie ahead for women’s progress.

A sense of both urgency and despair was woven throughout all of the questions: I know that paying attention to women is a great key to improving the world, and I want to help.  What now?

Let us strive to live by High Commissioner Bachelet’s concise charge: “We need to mobilize, hold firm, and advance”.